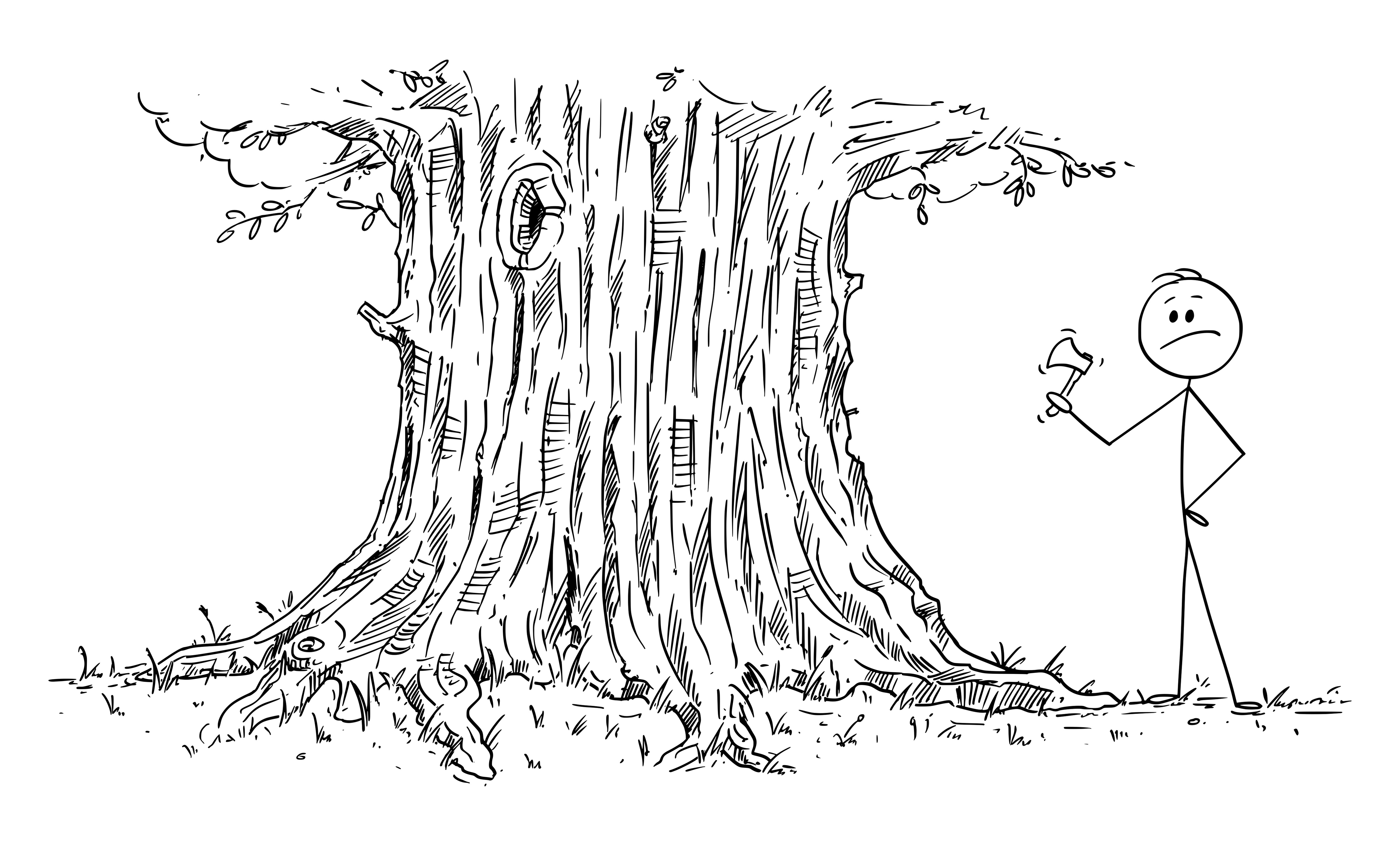 Recently, I put together a bookshelf for my office.  It was from a store that prides itself in making items that are labeled “assembly required” and come with vague instructions on how to do so.  I knew this going in and so I wasn’t bothered by that fact.  That was, until I realized there would be a hammer required in order to nail the backing on to the shelf.  Unfortunately, I did not have a hammer with me at the time.  Now the smart thing to do would have been to leave the shelf alone until I acquired the proper tools to do the job.  But I had already allotted this time to carry out the task, and so I blazed ahead using an adjustable wrench instead of a hammer.  And wouldn’t you know it, twice I drove holes through the backing because I was insistent upon using the wrong tool for the job.

Now unless I pulled specific books off of my shelf, you would never see the holes that I made.  In the grand scheme of things, these holes do not constitute a real problem.  But how often do we take this similar mindset and apply it to other areas of our lives?  How many of us are willing to admit that we have stubbornly endured bad relationships, poor financial decisions, or even worse ignored solid biblical counsel to pursue a path simply because we had our mind focused on a intended goal and didn’t take a moment to step back and contemplate the bigger picture?

Being stubborn can often be seen as a positive character trait, as we have the determination to finish what we start.  But this can also lead to our downfall when we are determined to pay whatever price to get there.

There are many biblical examples of people who followed their own desires instead of heeding the instruction of the Lord.  Pharaoh comes to mind as he repeatedly listened to his own heart and followed the wisdom of his counselors instead of repenting of his sin and turning to God.  His stubbornness and unwillingness to listen to the prophet led to his destruction and the death of the firstborn sons across the land.  Only those who sought the Lord, by shedding a lamb and spreading its blood upon the door post, were saved.  The difference was that Pharaoh trusted in His own abilities and believed himself to be a god, where the people of Israel trusted in God himself and followed His instructions.  Salvation came through faith in God, not faith in oneself.

I want to encourage each of you to take some time today and truly ask yourselves, “in what areas of my life am I trusting more in my own ability than in God himself?  Where do I run the risk of stubbornly using the wrong tool for the job because I am unwilling to seek what I need?”

God has promised life for those who trust in him, and not only life but abundant life.  John 3:16-18 states 16 “For God so loved the world, that he gave his only Son, that whoever believes in him should not perish but have eternal life. 17 For God did not send his Son into the world to condemn the world, but in order that the world might be saved through him. 18 Whoever believes in him is not condemned, but whoever does not believe is condemned already, because he has not believed in the name of the only Son of God.”

Don’t trust in your own works, good deeds, thoughts, or actions as if they will see you through to the end.  It’s not until you place your trust in the finished work of Jesus Christ alone for the forgiveness of your sin that you realize you are trying to hammer nails with an adjustable wrench.  You will not have success, and worse than a damaged bookshelf, you run the risk of putting your eternal state in jeopardy.  Jesus says later on in the book of John, John 13:6 “I am the way, and the truth, and the life. No one comes to the Father except through me.”