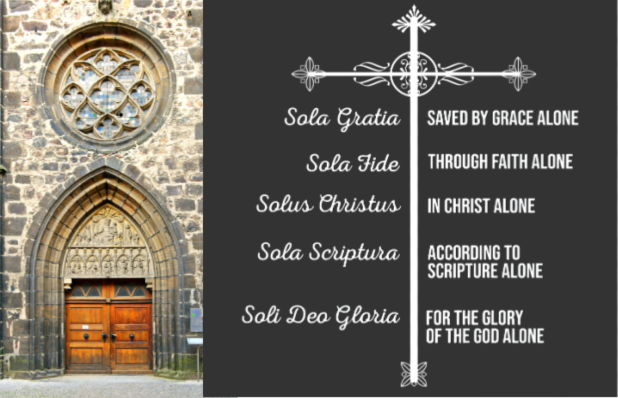 What does it mean to be Reformed?

First, to hold to Reformed theology requires one to have a high view of God’s sovereignty. While some would not put this on the list and simply assume it, I believe it is vital in order to truly appreciate what took place during the Protestant Reformation. What I mean by this is that at the basic level, man has to have a profoundly high view of God’s supremacy in all things and see God as actively involved in creation and in governing and overseeing all of the affairs of men. The idea of God’s sovereignty can be found throughout all of scripture. From the story of Joseph and his brothers, to God ordaining Jesus being crucified by the Romans, all things work out to the glory of God and to the good of His people who are called according to His purpose.

Secondly, to hold to Reformed theology one must adhere to the 5 Solas of the Protestant Reformation. These truths are the summary points of the theological battle that took place between men like Martin Luther, John Calvin, Martin Bucer, Huldrych Zwingli and others against the Roman Catholic Church. The Solas are Sola Scriptura (by scripture alone), Sola Fide (by faith alone), Sola Gratia (by grace alone), Solus Christus (in Christ alone), and Soli deo Gloria (to the glory of God alone). Each of these statements are a corrective against the unbiblical doctrine that was being taught and practiced in the Roman Catholic Church of the day.

Thirdly, to hold to Reformed theology one must affirm the Doctrines of Grace, which is commonly referred to as Calvinism. While the Solas define the battle lines, the tenets of Calvinism commonly summarized in the acronym TULIP truly lay out our understanding of who God is and how we relate to Him.

Fourthly, traditional Reformed theology also holds to at least one Reformed confession. In our denomination, the PCA, we hold to the Westminster Confession of Faith with the Larger and Shorter Catechisms. Other Reformed brothers and sisters may hold to the Three Forms of Unity, the London Baptist Confession of 1689, the Belgic Confession of Faith, or the Canons of Dort. These are theological statements that help guide both faith and practice. It is worth noting that any of these documents are only beneficial so far as they are accurately depicting the Word of God.

Fifthly and finally, to hold to Reformed theology one must have a view of Covenant theology. Covenant theology can be defined as “a framework for understanding the overarching storyline of the Bible, which emphasizes that God’s redemptive plan and His dealings with mankind are without exception worked out in accordance with the covenants that He has sovereignly established.” God has set two covenants for mankind, namely the Covenant of Works and the Covenant of Grace. We see these two covenants working throughout scripture, with both bringing condemnation through the Covenant of Works and its completion, and satisfaction in the Covenant of Grace which was purchased through the life, death, and resurrection of Jesus Christ.

Ephesians 2:1-10 “And you were dead in the trespasses and sins 2  in which you once walked,

passions of our flesh, carrying out the desires of the body and the mind, and were by nature

children of wrath, like the rest of mankind. 4  But God, being rich in mercy, because of the

great love with which he loved us, 5  even when we were dead in our trespasses, made us

and seated us with him in the heavenly places in Christ Jesus, 7  so that in the coming ages he

might show the immeasurable riches of his grace in kindness toward us in Christ Jesus.

8  For by grace you have been saved through faith. And this is not your own doing; it is the

created in Christ Jesus for good works, which God prepared beforehand, that we should